Heating up the compost heap.

It is probably good practice to get the compost heap to heat up, although I think that you can make good vegetable mould without the very high temperatures that some advocate for compost making.  I turned my compost for the second time yesterday and the vegetable mould was steaming. 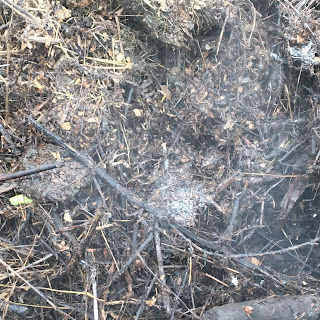 Not sure whether it is clear from the photograph but the compost is steaming away. 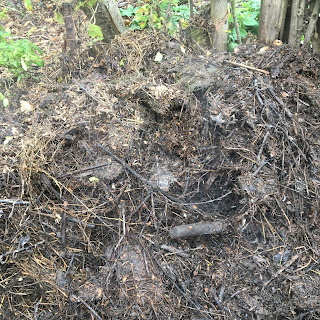 This is what it looked like when the breeze had blown the steam away
My composts include all the residues from the allotment regardless of their woodiness.  Woody prunings are cut up into small pieces before I add them to the compost heap.  I also use rabbit bedding and woody shreddings.
The temperature was quite hot and this probably helped to kill off some of the wildflower seeds and diseases that were on the residues.  However, I am never sure that even my best compost heaps are very effective in getting rid of seeds and pests and diseases.  The heat of the vegetable mould only helps to suppress them.  Other good husbandry needs to be employed to continue the suppression on the allotment.
Usually the compost does not seem to warm up very much but recently it has decided to become much hotter.  I think this is mostly due to the strimmed grass given to me from another allotment and grass mowings from the lawns.  I don't know why grass heats the compost heap so much but I always like to put it on the compost heap if I have it. 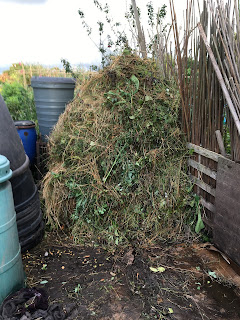 This is what it looked like a week ago.
And after two turnings it looks like this now. 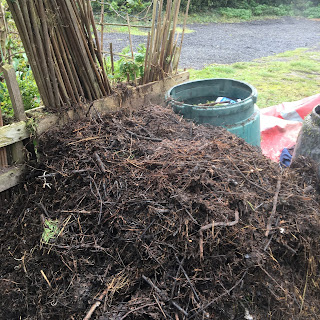 Compost after the second turning
I keep the compost moist not letting it get dry.  I have been making compost in this area for seven years now and I think that I have built up a good community of decomposing microbes in the soil and on the pallets around the area. There are certainly lots of invertebrates like flies and worms.  This all helps to break down the organic matter.  I am hoping to get some useable vegetable mould during the first week of November.  Maybe a little later if the weather gets any colder.    I will probably dig it into next season's potato bed.
I cover the windrow with old rags and a tarpaulin to keep the heat in and excessive rain out.  It doesn't look very good but it makes good compost.  So that the tarpaulin does not blow off the windrow, I put a bread tray with bricks in it on the very top.  The tarp only blows off in serious windy weather.
Posted by Anthony Cuthbert at 13:20

we are in
Britaine.co.uk
West Midlands